Wail City Percussion is a company specializing in hand made stave shell snare drums from my workshop in New Bedford, MA. At Wail City, I passionately craft each shell to create a drum to have exceptional tone, character, and versatility that you won’t find in any standard ply shell. 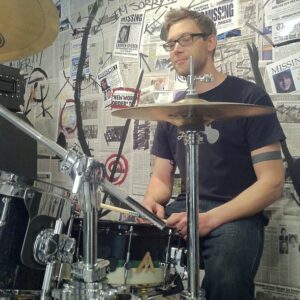 Sixteen years ago, an up and coming machinist and designer politely refused a well-paying job to follow his dream…to travel the world playing drums in a punk band. Years later, he found himself at a venue in Australia, watching the opening act perform their sound check. As the drummer started hitting his snare drum, the machinist-turned-drummer was blown away by the sound resonating from it. He discovered that it was a stave shell snare drum made by an Australian drum company and set out to one day own a snare like this. There was a slim chance that he would be able to afford one of these amazing drums on a struggling musician’s salary.

Fast forward a few more years, he found himself sitting across from a master woodworker discussing stave shell drums, and his plans to build his own. The woodworker was intrigued, and the two put their heads together. A few weeks later, the Wail City prototype was born! Made from secondhand hardware and scrap wood, the drum received solid reviews from band members and close friends and even made it on to a legit recording (Another Option’s The Great Walk). Since the beginning of Wail City, passion and a some times unhealthy obsession for building awe-inspiring drums continues to impress a new generation of drummers.

I felt the need to post this drum again. @chainay_

Had the pleasure of watching @neuebeigian rip his

Mail Bag question of the week. How big is your rou

This drum was built with lumber salvaged from the

Had the pleasure of watching @neuebeigian rip his

Mail Bag question of the week. How big is your rou

This drum was built with lumber salvaged from the